Reaching Out to
Lost Sheep

Sonlight Baptist Church in Colbert, GA. We are an Independent Fundamental Bible-believing Baptist church reaching out to the lost in our neighborhood and around the world. We are located in Oglethorpe County, Georgia near Winterville and Colbert. We are a missionary church acting on Christ’s Great Commission (Mt. 28:16-20).

A Small But Growing Christian Community

We are a small but growing Church. We are small enough to feel like a large family. At the same time, we are large enough to offer ministries for every age group. You will find us a friendly church that welcomes every visitor. We believe that the Bible is the inspired Word of God. At Sonlight Baptist Church, you will find lots of good singing, a choir, and great preaching from God’s Word.

We invite you to read the story of Sonlight Baptist Church in Colbert, GA. Our church history is a story of God’s faithful provision to this Independent Baptist congregation in Oglethorpe County. We begin our story, like the people of Israel wandering through the desert, with a tent. 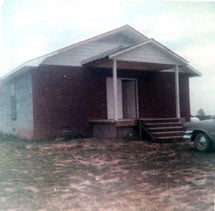 The Early Years: Tent to Building

Sonlight Baptist Church began on September 5, 1965 under a tent in the yard of Brother Claude Sorrow. Twenty-one people became the church’s founding members. Brother James Brock served as mediator. Rev. Ernest Palmer was called as Pastor. The church then moved into the old Coile’s Grove church building for the winter. In the spring of 1966, 10 acres of land were purchased and the auditorium with two small wings extending off each side was built. The church was later bricked and the wings expanded to their present size. 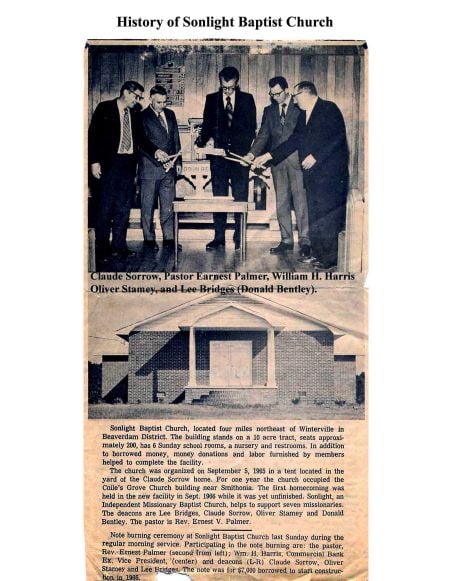 Pastor Palmer served the church faithfully for 21 years. In the fall of 1986, he retired because of health problems. He was unanimously named Pastor Emeritus of Sonlight Baptist Church. In the spring of 1987, the church called Rev. Billy Driskell as Pastor. He began a building program and soon a new 5000-square-foot sanctuary and 5000-square-foot basement were underway. Before the new building was complete, Bro. Driskell felt the Lord calling him to another church. He resigned in June 1991. In July 1991, the church called Dan Corbett (who was already attending our church) as Pastor. We moved into the new sanctuary at the end of 1991. Pastor Corbett resigned in June, 2003.

Our Present Story: Continuity Amidst Change

Our community was without a Pastor for over a year but was blessed by having many great men of God willing to fill the pulpit until the Pastoral Search Committee asked Jim Peterson to stand as pastor. The church unanimously elected Bro. Peterson. Bro. Peterson began as Pastor on August 1, 2004. He resigned in February 2011. A Pastoral Search Committee began work immediately, again with many great men of God filling the pulpit. Almost three months to the day that the committee began their work, the church elected Bro. Joe Davis as the new Pastor. Bro. Davis began as Pastor on May 29, 2011. 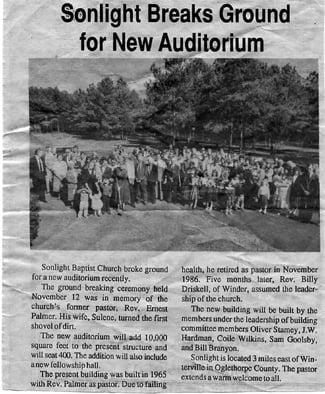 A Tribute to a Preacher

The history of Sonlight Baptist Church would not be complete without mentioning Preacher Ray Jenkins and his wife Joyce. From the beginning, Ray and Joyce have been a constant, loving presence and friend to our community. Bro. Ray filled the pulpit countless times when we were without a Pastor. He offered us much prayer, counsel, and encouragement as well as the Word of God when it was needed most. Ray and Joyce Jenkins are truly an important part of the history of Sonlight Baptist Church.

Be Part of the Story Today

Our church history is indeed a story of God’s faithful provision for His people over the past few decades. We invite you to join us as we continue living according to God’s word. This story continues in our Christian worship and ministries. Call us at (706) 742-9575 and be part of the story today.